The first Methodist Society in Milford was formed in 1777 when John Cooper was appointed the Circuit Rider of the Kent Circuit, which included Milford. Preaching first took place in the home of Reynear Williams, just east of Milford. Mr. Francis Asbury, superintendent of the Methodist Societies in America visited the society in May and June of 1778.

In November 1784, just north of Milford, at Barratt’s Chapel, the decision was made that American Methodists would no longer exist as societies within the Church of England, but that they would become a “Church” born and nurtured in America. In December 1784, at the Christmas Conference in Baltimore, MD, the Methodist Episcopal Church was born, with Avenue being a ‘charter member’ of America’s first denomination.

On December 3, 1787, Joseph Oliver, co-founder of Milford, sold a 120’ X 120’ parcel of ground on North Street in Mispillion Hundred to the Methodist Society. This was for the society to construct a ‘preaching house’ or church. A plain frame chapel, 30’ X 35’ and painted red was built. It ran east to west and was completed in 1790, the cornerstone having been laid in 1789. Wooden benches served as pews and whale oil lamps lighted the building. A second floor gallery was constructed on the interior with an exterior entrance for the use of slaves and persons of color. Bishop Francis Asbury recorded that he visited the new building in October of 1790.

By 1800, the congregation had swelled such that a 22 foot addition had to be made to the structure. This expanded building served the congregation until 1842 when a new two-story building of brick was constructed just across the street at the northwest corner of North and Third Streets. The original building was purchased by Governor Causey and moved to a nearby farm for use as a barn.

Burials began on North Street in the late 1700’s. After 1842 the original site ceased to be used as a center for worship and became a burial ground. Among the more notable people interred in the cemetery are the Rev. Trusten P. McColley, Governor Peter F. Causey, and Civil War General Alfred Torbert.

Sunday School had early origins in Milford when in 1827, 16 year old Ann Yoe organized a school on Sunday to teach the poor children of community. Like today’s Sunday School the Bible was the textbook, but the curriculum included basic literacy, and rudimentary mathematics, for children who worked all week, and otherwise would have remained illiterate. Initially the Sunday School did not meet in the frame chapel, but in houses, and then at the Academy before finding a home in the chapel.

The second building, erected in 1842 was a plain brick structure with a social hall on the ground level, and the sanctuary on the second floor. In the new Church, the social hall could be divided into various classrooms, for instruction and Scripture memorization. There were two sessions, one in the morning, and one in the afternoon, often numbering more than 150 children. By 1858 there was need for a branch Sunday School in South Milford (Sussex County). The school continued to grow and in 1885 a chapel was built on the corner of S.E. Front St., and South Washington in South Milford to serve the growing population.

In 1871 a third church building was begun along what was then referred to as Railroad Avenue (later known as Church Avenue, and now Church St.) The second building served as a music hall and playhouse until it was purchased by the congregation of St. Paul Methodist Episcopal Church in 1890. This building served their congregation until 1999 when it was demolished because of structural problems.

Construction of the third building was sporadic in part because of the national financial panic of 1873, which lasted five years. Although the building was not complete the first floor ‘Lecture Room’ was dedicated in 1873. Still not in the sanctuary, in 1874, the congregation experienced a great revival and 300 joined the church. In 1876 construction was resumed, and was completed in 1877. The congregation would face financial embarrassment again in 1879, narrowly averting a sheriff’s sale. 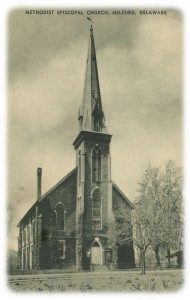 Once in the new building on Railroad Avenue, the congregation became known as Avenue Methodist Episcopal Church. By 1923, the building had begun to significantly settle and cracks could be found all over it. A poor foundation and the weight of the belfry were causing the bell tower to lean. In 1925, a building committee was appointed to determine whether the building could be repaired, or if another church should be built. The decision was made to build a new church. Adjacent lots were purchased for use in the construction of a new building. By the end of the year $54,915 had been pledged for construction of a new church. It was decided in 1926 to delay construction until more funds were on hand. Again construction was delayed because of a financial crisis, the Great Depression.

In February 1939, ground was broken for the new Sanctuary, and the cornerstone was laid on March 19, 1939. The present Sanctuary was completed in December and the building was dedicated on Christmas Eve 1939 by Bishop Edwin Holt Hughes. Windows from the previous church line both sides of the sanctuary, with new windows above the Altar and the Balcony commissioned for the new house of worship. The building also includes a small chapel and classrooms on two levels.

The old church still served as a social hall for a few years. Then in 1950 construction began on Fellowship Hall which was opened in 1951. Fellowship Hall along with the Wesley Room in the basement, added additional space for Christian Education, and youth Ministry. The last addition was an extensive education building that was completed in May 1966. It contains 18 classrooms, a spacious Choir room, and a suite of offices.

By the middle of the first decade of the 21st century, Avenue experienced rapid growth when a Contemporary Worship Service was added to the Congregation’s ministry offerings. At the same time, there new indigenous ministries were emerging, and more space was needed for Bible Studies, Recovering Groups, and Small groups. In addition Avenue was expanding its outreach and service to the community, and had begun to send out 2 or 3 mission teams each year.

At the same time it became apparent that parts of the building were wearing out from use, heating and cooling systems were inefficient and wasteful, accessibility limited use of the Wesley Room and Second Floor. And some spaces needed to be repurposed. In 2005 the congregation raised $500,000 to purchase two adjoining lots and the homes on them; and they modified the Sanctuary Chancel to make its use more versatile. During that renovation video projection was installed, the sound system was upgraded and a new organ was installed through a bequest from Mildred Masten Bach. The “Bach” Organ which is one of the largest in Delaware is an 80+ rank hybrid, Pipe and Digital Organ built by Rodgers.

In 2008 the Congregation launched a capital campaign called “Journey of Faith” for major renovations and building improvements estimated at $1.8 million. Prior to construction, the “Watson House” a beautiful Italianate home acquired in 2005 was given away so that it could be moved to another site and preserved there.

In The History of Avenue Church Willard Hickman writes, “So it stands today—with a beautiful sanctuary—a well appointed and functional education building – plus all other rooms necessary for Christian fellowship – ready to serve the 1200 members of the Church rolls and to continue its Christian outreach to the ‘uttermost parts of the world.’”